Two weekends ago I took part in Low Gap’s grasshopper – my first gravel/dirt event. I wanted to share my experience to encourage others to try new things as it was so much fun!

For a bit of context: I see myself as a pure “roadie”, and a pretty tame one. I seriously injured myself 2 years ago riding a mountain bike, which led to a year off the bike and long-lasting consequences. I am also the kind of “roadie” who gets excited when the pavement goes up and the excitement transforms into fear when it starts going down (which somehow seems to be the opposite to most people I ride with). But I had heard people and teammates rave about those types of events and decided it was time to put my fears behind me and give it a go. Needless to say that I showed up last Saturday fairly inexperienced and had no idea what I was getting myself into.  And I had so much fun!

Thanks to kind humans, I got a gravel bike with some “off-road” tires (thanks Shawn and Jen!) on and got a ride to Ukiah where the event was taking place (thanks Laura and Alex!). The weather wasn’t great – it looked like it was going to rain (oh oh, I had been warned about the mud!) but it was fairly warm. Immediately, I noticed how friendly and helpful people were – even though there were a lot of us, it felt like I was going on a big group ride with friends. I rolled to the start line, found a few familiar faces and lined up with them – far enough from the pros up front but not at the far back either.

The first half of the ride was on road, the second half on dirt. It started with a long climb on the pavement – “ok, that I can do” I told myself. I quickly lost my friends – there were so many people and I assumed they were ahead of me somewhere. I found a pace that I felt comfortable with and kept climbing. I was fairly conservative as I was dreading the dirt part and thought I needed to keep a lot of energy to survive it but despite that passed quite a few people. The next part was a fast descent – needless to say that I was passed by many of those I had passed on the climb. But I remembered Jen’s wise words “don’t worry, you’ll pass people on the climbs but will be passed on the descents” – yep, that was about right. Next came the dreaded dirt, I mean mud. Puddles of mud. A lot of mud. As I hadn’t ever ridden with knobby tires or ridden in mud, my roadie-self assumed I had to walk all the mud puddles. There’s no way a bike could ride those! Others seemed to be fine but I was convinced they had more skills than I did and that I would crash if I rode them. After walking some of the mud sections, it finally occurred to me that it was going to take me a very long time if I had to walk the remaining 20 miles of the ride. It just clicked (lightbulb moment) – those little knobby things on the tires mean you can actually ride the mud. Wow – game changer! I became quickly more comfortable as the ride went on and despite not being able to clip into my left pedal for the rest of the ride (roadie shoes/pedals are not a good idea!), I kept going – making some grounds on the climbs and holding on for dear life on the descents. I cannot emphasize how encouraging people were, from old friends to people I hadn’t met. It just seemed like we were all on a bike covered in mud so we might as well all be friends.  “You can do this roadie”, “Don’t underestimate yourself, you just rode past some gravel gurus”. Or “pace yourself, this is a long climb but the descent is worth it” while I was (secretly) thinking to myself “you don’t understand, I hope this climb goes on forever and we never have to do this scary descent”. The last descent to the finish line is a blur. It was not smooth. It was very washboardy. Potholes, tight turns, dirt and more potholes. My hands and arms were hurting from grabbing as tightly as I could to my handlebars (on my non-fitted loaner bike) and I felt like my brain was being shaken around. I tried to go as fast as I could – torn between trying to keep my position, but really wanting to avoid crashing. I definitely erred on the side of caution, getting passed by a dozen people. A woman flew past me too – wow, she was going fast! We hit the tarmac again, I saw the finish line and a feeling of relief hit me. I did it!

Time to get changed, grab a beer and some tacos and catch up with friends I hadn’t seen for a while. I loved the atmosphere, the community and it was really nice to have the opportunity to hang out with the other riders. The dirt scene has a very different vibe than the road scene. There is truly a space for everyone. If you want to race the event, expect a strong competition (and a good workout!): from roadie pro-atheles who are trying out the dirt to dirt extraordinaires who fly over the mud like someone is standing still. But you will also find a lot of people who want to ride the event with a group of friends or others who will stop to take pictures and grab a beer or two along the way. At the end of the day, it doesn’t really matter – all those (muddy) people will be chatting around food and drinks and when I looked around, everyone seemed so happy!

I was later told that I did a lot better than I had expected– the friends I was trying to find were in fact behind me and I came in 5th overall women behind 4 pros and 1st in my age group. Irrespective of my results, I absolutely loved the experience! I cannot thank enough people who encouraged me to surpass my fears and step outside my comfort zone (Jen, Laura, Alex, Judd, Shawn, Victoria and many more). I hope I can do some more similar events soon!

I am attaching a few pictures below or me, Jen and our muddy bikes! 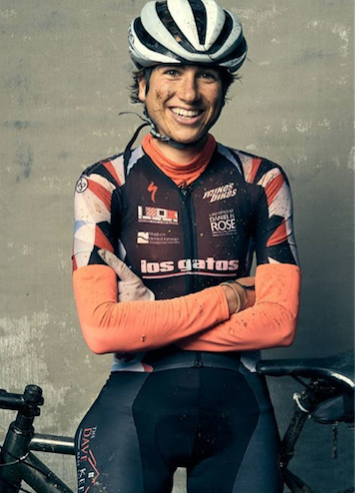 Thanks everyone who helped me with this setup!