I took a trip this past weekend to Frederick, Maryland for the mountain bike marathon nationals championships which was a 32 mile race held on old-school rock infested hiking trails.   It was completely different than the riding conditions we are used to in California, with no smooth dirt, no berms, and not a single place on the entire course where I could even think about locking out my suspension for a brief effort.

But prior to making the decision to do the race I had done a little research so I knew what I was getting myself into.  I had never gone to marathon nationals before and I thought that the Breck Epic stage race that Justin and I did in late August would be good preparation.  I was looking for a new challenge compared to my typical fall ramp up for cyclocross nationals in December.

I pre-rode the course on Friday and was happy with my tire choice of 2.4” width instead of my normal 2.25” and I was also using some foam tire inserts that would minimize the risk of flatting and also allow me to run 17 psi front and 18 psi rear.  The descents were super rocky with many stream crossings with big flat rocks under the water, and the climbs were also technical where you had a pick a line around/over the rocks and stay in the saddle so you had a chance of having enough traction.  Definitely no out of the saddle, head down hammering!

I executed my plan on Saturday to be the second rider onto the single track descent which began about a half mile after the start line.  I hoped to have a good wheel to follow to help me with choosing a line, but by mid-way down the descent the first rider had a put a gap on me and one other rider passed me.  We then got to the first big climb and a third rider passed me as I struggled to find the best route through the rocks.

The rest of race was relatively uneventful as I did a three hour time trial to maintain 4th place overall for the 50-54 Men but I never was able to contact the front group of three.  Towards the end of the race, there was some rain which made the leaf covered rocks even more slippery, but I made it to the finish without any crashes or mechanicals.

It was a good experience for me to try a new event in the sport of cycling, although if I go to marathon nationals again I will hope for a smoother course with bigger climbs which would better suit my strengths. 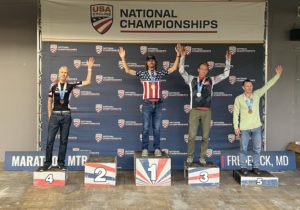