Last weekend I raced at Soldier Hollow in Utah, the second round of UCI races in this year’s US pro cross country tour. My mom and I drove out from California on Thursday and Friday, and we arrived late Friday afternoon in time for a course preride. I had raced at Soldier Hollow last year so I was familiar with the course, but it was good to practice new lines with my Cal Cycling teammate Dylan Fryer.

The elite short track and cross country races were not until the evening on both Saturday and Sunday, so I went for an easy spin in the morning to keep the legs awake and ready for racing. We were staying right in Midway close to a great local bike park, and there’s nothing like a few flow/jump trail laps to wake up the legs and get stoked for racing!

We arrived at the venue an hour and a half before the start, and I had a good warm-up with a few more efforts than usual to get ready for the high intensity of short track. The elite men’s field was just over 50 riders, but I had the 19th call-up thanks to my USAC points from Arkansas and Collegiate MTB Nationals. We started on the pavement and lined up 10 wide, so I had a second row start position. I clipped in fast and sprinted off of the line (peak 5 second power), moved up through the corners, and ended up in 7th position going into the singletrack descent! Coming around into the second lap, the leaders sat up on the long headwind straight and allowed the entire field to regroup. Lots of riders came around the outside and I ended up back in twentieth or so when we sprinted into the next climb. As expected there was a bottleneck at the top of the course, and I had to wait for a few seconds. With everything strung out after that, it was the last time I saw the front of the race. I chased super hard on the third lap but wasn’t able to make it back to the group, and definitely paid for my effort. After I blew up I knew my race was over, so I saved my energy for the cross country and ended up finishing a little over a minute back in 31st.

On Sunday we showed up a few hours before the start of my race so I could watch the juniors. I talked to a few of my friends after their race and got some good advice on the course, especially A/B line options on the first lap. The air temperature was dropping quickly as a snow storm was coming in, and it started to rain lightly. It felt weird to be racing so late in the day and in changing weather conditions, but I warmed up well and was ready to go at 6pm. The start was not quite as intense as the short track, and I held my position inside the top twenty. The first climb splits into an A/B line, (A) shortcut through tight trees, or (B) longer fire road climb. The first twenty riders funneled into the A line, but I took the advice of the juniors and went around on the B line, leading a large group behind me. Apparently it was the right decision, because I gained several positions and ended up in the top fifteen. However, when we hit the second climb of the lap I was unable to hold the pace and fell back into the twenties. I settled in with a group for the second lap before getting dropped again on the long climb. It was frustrating not being able to put down the power I knew I was capable of, but a combination of the altitude and race day factors meant I just didn’t have the legs. Riding solo for most of the race, I stayed smooth and fast on the descents and tried to make up time where it was possible. I continued to fuel well and push as hard as I could, and passed a few riders in the last laps to finish in 27th.

Overall it was a great weekend of riding fun trails, watching the juniors, and challenging racing. The first lap of the short track was exciting to be at the front of a UCI elite race, hopefully I can learn from it to make some better decisions in future tactical short tracks. Although I didn’t have the legs I had hoped for in the cross country, it was another consistent race and a good experience. I am now back home from school for a month of training and local races before traveling to Montana and Canada for the next ones! 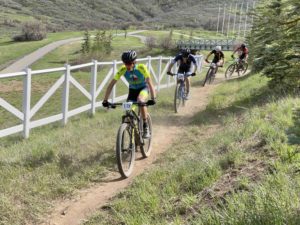