Last week I traveled to Arkansas for the US Pro Cup, the first UCI mountain bike races in the US this year. The Bentonville area is known for its endless network of man-made trails, thanks to millions invested by the Walmart family. The course in Centennial Park is made up of flowy descents with berms, jumps, and rock gardens, and short steep climbs back up to the top of the venue. I pre-rode on Tuesday evening to practice the A-line jumps and rock gardens while doing a few leg openers.
After an overnight downpour, Wednesday’s cross country race was postponed to Thursday, with an 11:30 am start time. I warmed up with Sandy Floren and arrived at the start area with plenty of time to make my 82nd call-up, almost at the back of the elite men’s field. The first few minutes were chaotic with everyone fighting for position, but I was able to use the start lap to move up before the first singletrack downhills. The course was much muddier than expected, making for some slippery descents and nearly unrideable climbs for most riders (except for world champion short track rider Christopher Blevins). Eventually, I settled into a good rhythm, descending quickly and powering up the climbs, while trying to stay smooth and fast over the challenging rock gardens. I was moving up and gaining a few positions each lap until I got pulled with a couple laps to go. I wish I had gone a little harder earlier to make it one more lap, but was happy with 46th in my first UCI elite race.
The short track was held on Friday afternoon. My result from the previous day gave me a better call-up around mid-pack, which was critical for this short 20-minute race. The start was super fast, which unfortunately resulted in a big crash. With people flying over the bars and sliding across the pavement in front of me, I was lucky to make it through and chase onto the back of the lead group. The four minute lap consisted of one short climb and lots of flat grassy corners. Even at a full sprint I was unable to hold the pace on the climb, but managed to maintain power over the top and catch riders every lap. I was pinned just trying to stay with my group, but managed to hold on and finish 46th again! This was one of my hardest efforts in a while, with an average heart rate of 198 and max of 205.
In anticipation of more rain, Sunday’s cross country was moved to Saturday evening, making for three days of racing in a row. The elite men went at 6 pm under dark clouds and strong winds. Sandy and I had a good warmup on some fun trails, getting in the zone to race again. At the start I clipped in quickly and had a good line through the first few corners, gaining several positions. I took the start lap at full speed and went into the first full lap somewhere in the 30s. However, on the first descent I pushed a little too hard in a slippery corner and crashed. I was mostly ok but lost at least 15 places before I was riding again. Even after that I didn’t have the best legs after the last two days of racing, and was going backward. I continued to suffer up the climbs and enjoy the descents until getting lapped and finishing 61st.
Overall this was a great experience in my first elite races against some of the fastest mountain bikers in the US. I definitely enjoyed spending the week in Bentonville and exploring the area while staying on top of my coursework. I am happy with my top 50 results in both cross country and short track, and can’t wait for the next UCI races this summer!
-Justin 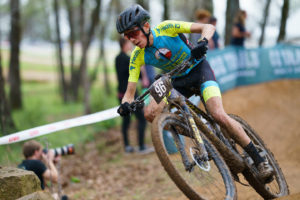