The Redlands Bicycle Classic is the longest continuous running invitational, professional stage race in American bike racing. Each year, the City of Redlands, CA and surrounding communities open their homes, their hearts and their streets to world-class athletes. From humble beginnings on a Memorial Day weekend in 1985, the event, featuring 350 elite racers, has hosted future stars of the Olympics, Tour de France, and World Championships. The Redlands Bicycle Classic’s long heritage of attracting future stars has earned its position in history: “Where Legends Are Born!”

A technical splash of corners through a bike festival in the heart of Redlands! The race started off the gun with fury. It soon became apparent that DNA and Instafund were battling for control, with Lux attempting to swipe the Sprint jersey. Our support on the sidelines kept us up to date, minute by minute on the moves which was so helpful! Lisa Cordova (Cat’s Hill/Santa Cruz Criterium Omnium Champion) followed one move with Heidi Franz and the Columbian National champion that seemed very dangerous. This of course was shut down quickly, which Lisa was thankful for because the effort was significant to hang onto them. As Lisa faded back to recover, Eleanor Wiseman (Belgium National Virtual Race Champion) moved up into the top 10 watching for moves. A Fount rider took a flyer with about eight laps to go. She held a 10 second gap while DNA and Instafund blew threw riders trying to bring her back. She was eventually caught with about 2 1/2 laps to go. With Eleanor in a safe place, the LGBRC began moving Lisa up with about five laps to go. With everyone jockeying for position on the backside of the final lap, Lisa was able to push herself into the top five and jumped before the final two corners that led into the final 100 meters. She led through the final corner, then opened it up. She finished with a couple bike lengths between the rest of the pack as they faded on the final run in. So many emotions after that for the team! We had a race plan for today and we executed it perfectly!

The LGBRC thanks all its sponsors for more making this victory against professional teams possible! 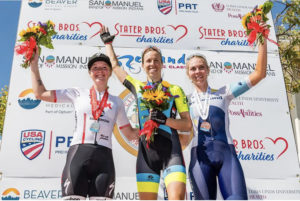