My teammate Dylan Atkinson and I just completed a three-week road trip to three UCI mountain bike races in Montana and Canada! We took his Sportsmobile van and camped out at the race venues along the way. It was a great trip with tons of amazing riding in between the race weekends.

Our first stop was Missoula, Montana for the Missoula XC. After several days of driving with stops in Tahoe, Bend, and Spokane, we arrived in Missoula a few days before the race. Dylan and I pre-rode the course behind some of the top US junior riders and learned the lines on the descent. With over 1200ft of elevation gain per 4-mile lap, it has the most climbing of any US Pro XCT race. Conditions were perfect for the preride, but it started to rain nonstop the next day. We raced the short track in the rain on Friday night and were completely covered in mud. I had a great start and rode well on the slippery technical sections of the course, finishing on the lead lap in 17th. The next day I lined up for the XC, feeling good despite such a hard effort in the short track. After moving up through the field in the start sprint, I settled into a fast pace on the first long climb. I could see the lead group up the dirt road, but decided to manage my effort and maintain the gap to avoid blowing up. It was about a 20-minute climb followed by a 4-minute descent back down to the bottom. I settled into my threshold power on the climbs and tried to recover on the descents while flying off jumps and ripping around the banked corners. Finding a few other people to push the pace on the climbs, we moved our way up and passed a few riders each lap. Despite staying on top of nutrition and hydration, I had to fight through cramping issues on the final lap and give it everything I had left. I finished 13th in a solid field with most of the top U23s. My top fifteen result gave me my first elite UCI points, guaranteeing a better call-up at future races!

The following week we drove north to Canmore, Alberta for the next race in the Canada Cup series. It ended up taking two days of driving through the rain, which was not the most enjoyable, but we found a good campsite and set up for the week. With several aggressive Grizzly bears in the area, we had to carry bear spray and limited most of our riding to the race venue. It was a very technical course with slippery roots and rocks, so it was good to get a lot of practice laps throughout the week. The short track on Thursday played out very tactically, but I missed the main group and ended up off the back in 27th. Hoping to improve my result in the XC on Saturday, I dug deep on the start climb to try to move into a better position before the singletrack. Unfortunately I ended up behind some slow descenders farther back than where I wanted to be. I had gone into the red in the first few minutes and struggled to recover, unable to pass when the course opened up again. I was so blown up that I couldn’t think on the descents, and ended up crashing in some slippery roots on the first lap. I took a second to straighten my bars and get going again, backing off my effort a little in hopes of resetting my body. However, I still didn’t have the legs on the climbs and had lost a lot of my motivation to try to move forward. I ended up riding near the back of the race until I was pulled with a couple laps remaining in 33rd. Not an ideal result but good technical practice and a reminder not to blow up on the first climb.

Finally we drove to Whistler, British Columbia for a week of riding and one more Canada Cup XC race on Saturday. We split the drive into two days and stopped in Revelstoke for some fun yet extremely muddy trails. On our first day in Whistler we went to ride some of the gnarliest enduro trails on the west side of town, complete with big rock slab features and tons of woodwork. Halfway through the week I did some VO2 intervals early in the morning and then we rode a beautiful old-growth forest singletrack route with friends. The next day we decided to go the Whistler Bike Park and spent 10 hours having fun on the most well-known lift access trails in the world. We did 18,000 vertical feet of jump lines and tech trails, all on our xc bikes. On Friday we remembered we were bike racers, and took an easy recovery day to scout out the course. This one was also a decently technical lap, but with several long climbs between the descents. On race day the weather was finally hot and sunny, making it physically challenging for everyone. I had a great start sprint and ended up in the top five going into the first descent. On the long climb I decided to set my own pace and let some riders pass, not wanting to go over my limit after what happened in Canmore. I dropped back to just outside the top ten and was settling in with some of the other American riders before I dropped my chain on the descent and lost a little time. I could see a group ahead of me but the fatigue set in and I was unable to close the gap. I ended up on my own for the rest of the race, pinned on the climbs and barely recovering on the descents. I held my position for the full six laps and ended up finishing 15th overall. With an average heart rate of 193 and regularly over 200 on the climbs, it was definitely my hardest race effort in a while. While it wasn’t quite the result I was hoping for, it was another solid workout leading into nationals.

I really enjoyed this road trip with Dylan, we had tons of fun riding in so many new places. I am stoked with my first good elite result and UCI points at Missoula, and glad to get some more racing experience at the Canada Cups! 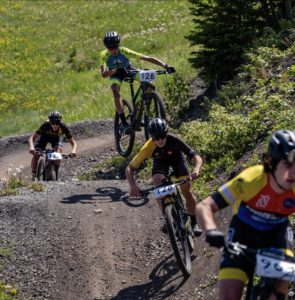 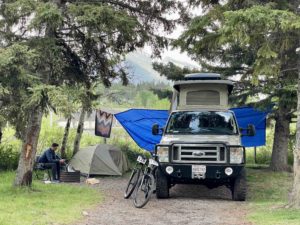 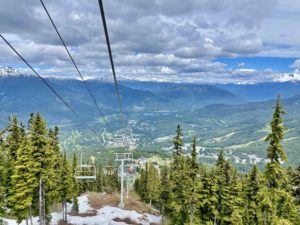