Greetings from Winter Park, Colorado where I just won the Mountain Bike National Championships for the men’s 50-54 age group on a hilly course that climbed to elevations over 10,000 feet.  It was my second attempt at a stars and stripes jersey after finishing 3rd last year on the same course.
Despite competing in hundreds of races over my decades of bike racing, I was nervous before the start since I knew I had a good chance at taking the win.  I felt like I was well prepared, with lots of racing this spring and early summer in mountain bike as well as gravel events.  I had also spent some time at 6,000 feet of elevation near Lake Tahoe, so I was hoping that my body was adapted to the lack of oxygen.
The start is on a long gravel climb that transitions to single track and I took the lead just before the long descent, since I was not confident in the descending speed of the group and thought that it was better to be first.  By the end of the first of four laps I had an 8 second gap on former Olympian Travis Brown from Trek, and I expanded that gap to 50 seconds by the end of lap three.
But going into the last lap I started having some leg cramp issues and had to back off on the power in order not to go into full leg lockup.  I tried to spin an easier gear and stay right on my limit.  Racing at altitude is tough on the body and I focused on being smooth and fast on the descents so I was not losing any time there.
I survived to pedal into the finish alone with a 38 second gap on Brown.  I had enough time to savor my first national championships victory and get my hands in the air!
-Chris 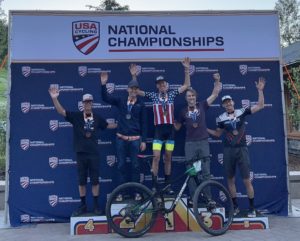 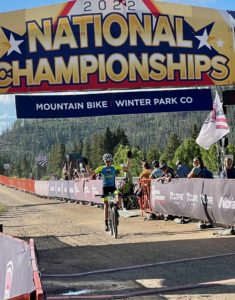