Hi Team,
Justin and I traveled this past week to attend this cold and muddy event in New England.  Justin was racing the collegiate and U23 race and I was challenging the 50-54 men’s field.  The first event was the collegiate men on Thursday, so we arrived in time to check out the course on Wednesday.  Hartford had received heavy rain on Tuesday which turned the grass into a mud bog that would have been perfect for a tractor pull competition.  So we did a couple of practice laps to determine what parts would potentially be rideable if the moisture dried up a little.
Thursday brought some sunshine and temperatures in the high forties which allowed some parts of the course to be ridden on a bike instead of just pure running.  Justin had a challenging start but worked his way into 5th place by the end of the first lap.  He powered through the muddy ruts and took a clean bike from me in the pits on each of the four laps.  With quick work at the pressure washer station, I could have his bike ready to roll again when he needed it.  Justin had an exciting last lap and his trip through the pit lane was faster than riding the course since there was less mud.  He made a late pass to finish 4th place in his first collegiate cyclocross championship and was all smiles on the podium!
Friday was sunny again in the forties and it was my chance to try to earn my second stars and stripes jersey for the year.  I had a front row start thanks to my 5th place from last year, and I tried to make the most of this advantage but got stuck in a slowdown at the first turn.  So I settled into a long chase to try and catch the leaders and worked my way from about 15th place to 2nd place by the end of two of the four laps.  The course had dried out significantly so there were still multiple deep mud running sections every lap, but there was no need to change bikes as long as I shouldered my bike early enough.  The last two laps were a battle with Adam Myerson who I have raced against for 30 years, with Adam putting small gaps on me in the technical mud sections and me catching back on during the faster sections.  I knew I had to lead the last lap and try to hurt Adam on the fast sections so I made my move with one lap to go.  Adam and I passed each other probably six times on the last lap, but he ultimately put a few seconds on me when I had to run a section that he was able to ride.  I ended up in 2nd place by just 3 seconds!
Sunday was Justin’s U23 Men’s race with a course that had frozen overnight but was thawing slowly, making for the slipperiest possible conditions.  USA Cycling’s call up procedure put Justin on the 7th and last row of the start grid which added to the challenge.  California cyclocross race promoters do not use USA Cycling to sanction their races so Justin had no points despite three wins in California elite men’s races in the last month.  But he happily set off with the goal of passing as many riders as possible.  He fought valiantly up to 28th place on the day and has two more years to better this result as an under 23 ranks!
Below are some pictures for you all to enjoy, and the race was featured on the USA Cycling Instagram site as well.  You can also read a short article with pictures from my race on the cxmagazine website.
-Chris and Justin 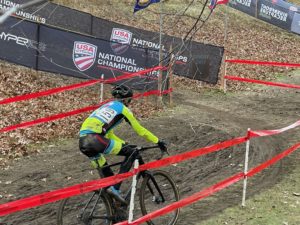 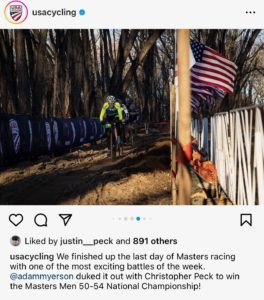 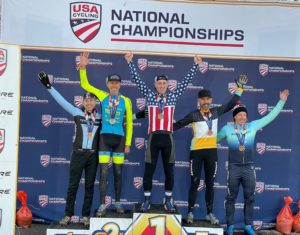 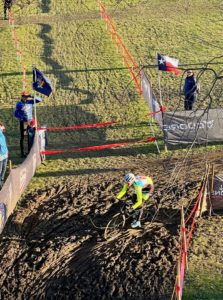 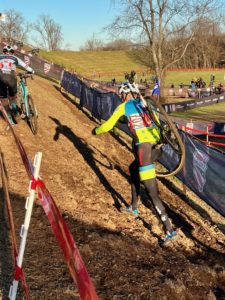 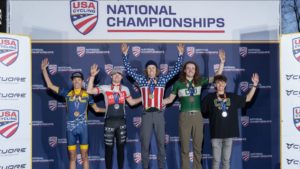